Back to the old continent.

Well, have been back for a couple of weeks. 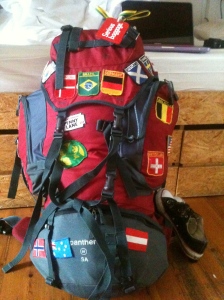 Arrived straight to a gig, packed a little bag and went back to the airport to set off to Germany and then Croatia. It was meant to be for a few days…am in Paris at the moment where I spent a day at a photo shoot with the band I work for and a day hanging out with some friends who live here. With one pair of jeans, one pair of broken Converse and a couple of tops bought along the way as the trip was being extended.

Bought myself an Eurostar ticket to get back to London in a couple of weeks and was meant to stay in Germany until then. Am thinking of staying in Paris a few more days though…

If it weren’t for the money issue (borderline broke), I’d probably be in Sarajevo at the moment heading down to Greece then moving on to Turkey.

Other than that, at the moment I’m extremely thankful for H&M, international friends, mitfahrgelegenheit (hitched a ride from Croatia to Germany last weekend!), no speed limit at the autobahn and coffee shops with plugs and free wifi.

Will try to post music news soon. Should try. So many notes written in a million little pieces of paper and several corners of my mind…